What is Double Mechanical Seals

Compared with the single end face mechanical seal, the double mechanical seal has a better sealing performance. It is suitable for the sealing of strong corrosion, high temperature, suspended particles and fiber media, gas media, flammable, explosive, volatile, and low viscosity media, and high vacuum conditions. The double end face mechanical seal is not just the repetition of the single mechanical seal. In some key occasions in the chemical industry, it can effectively prevent the leakage of dangerous, toxic, flammable, and explosive substances, and has a high-performance insurance function. When sealing high-pressure media, it can reasonably distribute the pressure difference between the two ends of each seal and increase the working pressure range of the seal. For some media with poor self-lubrication, easy to condense, and vaporize, the efficiency and service life of the seal can be greatly improved by injecting the sealing liquid(barrier fluid) into the sealing cavity to improve the sealing conditions.

The principle of the dual mechanical seal is basically the same as that of the single mechanical seal. Both rely on the end surface (friction pair) perpendicular to the axis of rotation to maintain a fit and relative sliding under the action of fluid pressure and the elastic force of the compensation mechanism and the auxiliary seal and constitute a device to prevent fluid leakage. The double acting mechanical seal structure is shown in Figure 1.

When working, under the action of the resultant force caused by the fluid pressure (medium pressure) and the elastic force of the elastic element, an appropriate specific pressure (pressing force) is generated on the end face of the seal ring, so that the two contact end faces (moving ring, static ring) are closely attached, and a very thin liquid film is maintained in the very small gap between the end faces achieving the purpose of sealing. The double cartridge mechanical seal has two end-face seals. If the primary seal fails, the secondary seal can still be sealed to prevent leakage. Generally, double-end face seals require an external sealing liquid system, and the sealing liquid is introduced into the sealed cavity for plugging, lubrication and cooling, and it is mostly used for circulating cooling. The sealing fluid(double mechanical seal barrier fluid) can not only wash the friction pair to improve the working environment of the mechanical seal but also serve as an important detection method for the failure of the primary sealing surface. 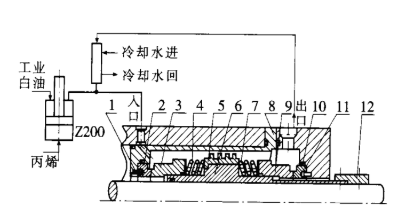 2. Static ring on the medium side

3. Moving ring on the medium side

There are many classification methods for double-end mechanical seals.

1. According to the pressure of the sealing liquid system, it can be divided into pressure double seal and pressureless double seal.

The pressure in the non-pressure double seal sealing system is generally normal pressure or micro pressure, which is lower than the pressure in the seal chamber before the first level seal. When the primary seal leaks, the medium in the pump will enter the sealing liquid system, causing the pressure and liquid level of the sealing liquid system to rise. Leak monitoring and alarms can be realized through a pressure switch or a liquid level switch. The use of a sealing fluid system to monitor the failure of a double cartridge mechanical seal is also one of the most important forms that distinguish it from a single-end mechanical seal.

2. According to the arrangement of friction pairs, there are four types: radial, face-to-face, back-to-back and tandem, as shown in Figure 2.

The radial dual mechanical seal consists of a pair of mutually matched moving rings and static rings. The main technical structure is characterized in that ring grooves are correspondingly opened on the mating end faces of the moving ring and the static ring to form two radial matching friction pairs. The static ring is provided with a drain hole to form a radial double end face mechanical seal. Its overall structure is simple and compact, with small structural space and convenient installation and use. It is especially suitable for occasions with limited radial installation dimensions. 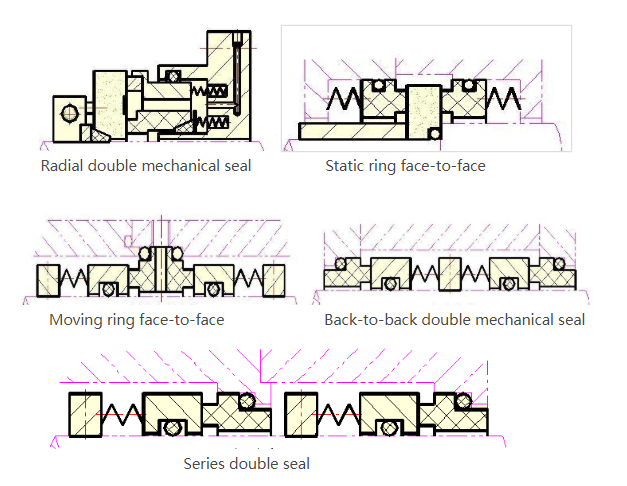 Among the failures of rotating equipment, the shutdown due to mechanical seal leakage accounts for about 50% of the total maintenance equipment. The failure mechanism of the double-end mechanical seal is basically the same as the failure mechanism of the single mechanical seal, mainly the failure of the sealing surface. During the operation of the pump, the temperature of the sealing surface will increase due to the heat generated by friction and stirring. In addition to the influence of the medium, gasification of the sealing surface medium, deformation of the sealing ring, thermal wear, and even thermal cracking will occur. Some media will aggravate solidification, polymerization, crystallization, coking and corrosion when the temperature changes. Various abnormal working conditions will aggravate or directly lead to seal failure in the short term.  Relevant agencies have conducted investigations on pump machinery for several years. The reasons for seal failure and their proportions are shown in the table 3.

It can be seen from the above table that the main cause of dual mechanical seal failure is operation problems. When analyzing the failure, it is necessary to conduct an in-depth study of the entire process, including the leakage state before disassembly, the amount of leakage, the inspection during the disassembly, and the detection of sealing parts. Find the leakage point and the true cause of the failure, and then take corresponding measures.

It can be seen from Table 3 that the main reason for the seal failure is the operation problem, so do daily maintenance work. Providing a reasonable working condition for the double-end mechanical seal is a prerequisite for normal and good seal operation. Do daily maintenance and ensure the following points.

1) Check whether the auxiliary device is normal before starting. Ensure that the liquid level and pressure of the sealing fluid system are within the operating range, and all parts are well sealed. Press the steering wheel to fill the machine seal with liquid through the double-end machine seal pump effect ring.

2) Do not evacuate the pump to avoid dry friction on the sealing end surface.

3) Frequently check whether the auxiliary device is working properly:

a. Pay attention to the position of the sealing liquid level. If the oil level is lowered, it should be replenished frequently, and the pressure should be supplemented to maintain the pressure.

b. Drain the leaked liquid regularly.

4) Prevent the influence of vibration and heat generation on the seal.

a. Pay attention to abnormal sound, vibration may cause the anti-rotation pin to loosen or fall out.

b. Pay attention to abnormal heating, such as whether the bearing heating is normal, and make reasonable adjustments.

From the perspective of the sealing mechanism, whether it is a double mechanical seal or a single mechanical seal which is difficult to control and has a large leakage, is transformed into an end seal (friction pair), static seal and pseudo static seal that is easier to control. The two-stage end face seal gives the double acting mechanical seal safety, reliability and no leakage to the outside. According to the arrangement of friction pairs and the sealing fluid system, the dual mechanical seal has a variety of structural forms to meet the requirements of various working conditions. There are many reasons for the failure of the double-end mechanical seal, and they are also very complicated, which can be solved by taking corresponding measures. The leakage of the double mechanical seal is directly related to the process operation, installation and maintenance. In daily production, operation should be standardized, management should be strengthened, and a summary analysis of failures should be done to ensure and improve sealing efficiency and life.