An Automotive Water Pump Mechanical Seal WM FBS, or a mechanical water seal, also referred to as a mechanical face seal but usually simply as a mechanical seal, is a type of mechanical seal used in rotating equipment, such as pumps, mixers, blowers, and compressors. An Automotive Water Pump Mechanical Seal WM FBS uses both rigid and flexible elements that maintain contact at a sealing interface and slide on each other, allowing a rotating element to pass through a sealed case. The elements are both hydraulically and mechanically loaded with a spring or other device to maintain contact.

In an Automotive Water Pump Mechanical Seal WM FBS, two ringed “faces” or seal heads rest flat against each other (but are not attached) in the seal chamber, which is located between the volute (the “wet end” of the pump) and the motor. An actuator, such as a spring, presses the faces close to each other. The rotating motor is inserted through the two ringed faces and attached to the impeller. As the motor shaft rotates, the upper seal (closer to the motor) rotates with the shaft. The bottom seal closer to the volute remains stationary. This action creates a sealing interface that keeps the water in the volute and prevents leakage. A minimal amount of water might escape the sealing interface but this liquid essentially acts as a lubricant for the seal and will eventually evaporate from heat. Secondary seals, also commonly ring-shaped, encompass the primary seal faces to create an additional barrier. 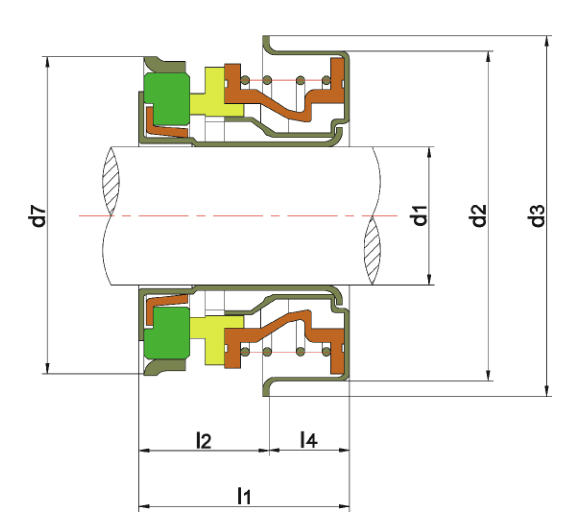