China Double Acting Mechanical Seal WM5ED is defined as an arrangement of two mechanical seals in a series. Double mechanical seals require fluid exchange between the inboard and outboard seal faces. Each China Mechanical Seal must be installed with an environmental control/support system that introduces a barrier or buffers fluid in between the primary seals. This fluid is typically delivered from a tank to cool and lubricate the seal faces using a piping plan. The use of a level and pressure meters on support tanks are crucial for both containment and safety.

China Double Acting Mechanical Seal WM5ED helps maintain acceptable pump efficiency, reliability, energy consump­tion, water usage, and emissions control. These factors can materially facilitate achiev­ing total-lifecycle cost-reduction and sustain­ability objectives. Sealing performance can be improved for centrifugal pump applications by upgrading from traditional compression packing to mechanical seal technology. The seals themselves are referred to as the “primary” (or inboard) seal and the “secondary” (or outboard) seal. A double seal arrangement is a superior option to a single cartridge when it is imperative the product being pumped does not leak into the atmosphere. The use of a China Double Acting Mechanical Seal WM5ED allows the operator to monitor the seal water, looking for discoloration to indicate that the primary seal has started to leak. The Double Acting Mechanical Seal WM5ED design permits the use of a less exotic inboard seal material so when replacement is necessary it is less expensive.

● Prevent a hazardous product from reaching the atmosphere/polluting the environment.

● Maximize seal life by controlling the type of fluid film on the seal faces.

● Provide an alternative when the process fluid will not provide stable and reliable lubrication of the seal faces (such as gaseous media, viscous fluids, non-settling slurries, or fluids liable to harden).

● Establish a backup seal in the event of an inboard seal failure or planned equipment repair (or to identify seal failure during operation).

● Avoid contamination of the process media should one seal fail 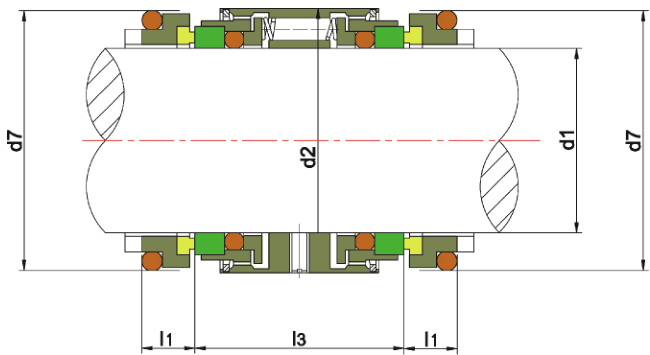