The mechanical seal is a combined mechanism composed of a series of simple design elements. The sealing function is completed by two main sealing rings with flat surfaces to prevent leakage. One of the sealing rings rotates with the shaft, and the other sealing ring is fixed on the housing. In order to seal the centrifugal pump shaft, a static seal ring is installed on the gland of the seal chamber. During the rotation of the pump shaft, the sealing surface of the sealing ring mounted on the shaft rubs against the sealing surface of the opposite static ring. The contact action of the two sealed contact surfaces is similar to that of a bearing and is subject to wear. Any form of system leakage must pass through this sealed contact surface. The force acting in the axial direction keeps the seal ring in frictional contact at all times. The source can be mechanical or hydraulic. In many designs, the sum of the two is used. This stable contact can prevent leakage from between the friction surfaces or minimize leakage.

As shown in the figure above, the seal face is spring-loaded and can move freely in the axial direction to maintain contact with the seat. Axial mobility allows automatic compensation for wear, eccentricity and thermal displacement of the shaft. The O-ring plays an auxiliary sealing role, which can play a radial sealing and buffering role, so that the entire seal does not have rigid contact in the radial direction. At rest, the grinding end surfaces of the moving ring and the static ring are in mechanical contact, but when the shaft rotates, complex friction occurs between the end surface and the sealed fluid. 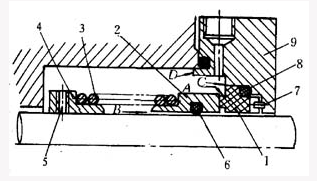 The possible ways of fluid leakage in the mechanical seal are as shown in the four channels A, B, C, and D in the above figure.

The leakage passages C and D are the seals between the stationary ring and the gland, and the gland and the shell respectively. The B channel is the seal between the rotating ring and the shaft. When the end face is frictionally worn, it can only follow the compensation ring to make a small amount of movement in the axial direction. In fact, it is still a relatively static seal. Therefore, these leakage channels are relatively easy to plug. The most commonly used static sealing elements are rubber O-rings or PTFE V-rings, while the rotating ring or stationary ring as a compensation ring is used for auxiliary sealing, and sometimes rubber, PTFE or metal bellows that have the function of elastic elements are used.

The A channel is a dynamic seal in which the end faces of the rotating ring and the stationary ring are attached to each other and slide relatively. It is the main seal in the mechanical seal device, and it is also the key to determining the performance and life of the mechanical seal. Therefore, the processing requirements for the sealing end face are very high. At the same time, in order to maintain the necessary lubricating liquid film between the sealing end faces, the unit area pressure on the cavity end face must be strictly controlled. If the pressure is too large, it is difficult to form a stable lubricating liquid film, which will accelerate the wear of the end face. If the pressure is too small, the leakage will increase. Therefore, in order to obtain good sealing performance and sufficient life, when designing and installing the mechanical seal, it is necessary to ensure that the pressure value per unit area of the end face is in the most appropriate range.